What is best in Miami

Take a number of diverse cultures, add a strong dose of the arts and a splash of ocean water, and you have Miami. Looking at the fantastic art museums and the blossoming gastronomical scene, you might find it hard to believe that just a century ago, this colorful Floridian city was covered in swampland. Once developers rushed into the area, one of the most popular tourist destinations and spectacular city skylines in the country was born. Today, with South Beach before you and the Everglades behind you, you can walk through the bustling streets past historical homes with Spanish words and Caribbean music floating into your ears.
This mini melting pot has preserved multicultural neighborhoods like famous Little Havana as enclaves for unique traditions to thrive. United, they form an electric network – Miami. Its reputation for vibrant nightlife and extravagant parties is realized in Miami Beach, a barrier island to the east of the mainland. Meanwhile, the down-to-earth city proper cultivates an artsy vibe. For a taste of Miami Beach, sign up for one of the city's best boat tours, where you'll be able to marvel at the glitzy skyline from the water on a boat tour or via parasail.

Eddie Walker (Eddie Cancer), the founder of the village of Stiltsville, immigrated to Miami from Key West in 1907, first built his house here in the early 1930s. Walker earned by selling fish bait, as well as beer and soup, for which he caught crayfish right under his house. There are legends about his wonderful soup.

Seeming to foat above Biscayne Bay's shallow seagrass beds, Stiltsville has a colorful history that dates back to the 1930s, when "Crawfish Eddie Walker" built the first shack on stilts above the water. Over the years more buildings were constructed, and the area took on an aura of mystery. Accessible only by water, the area was the place to see and be seen when visiting the winter resorts on nearby Miami Beach. Stories of illegal alcohol and gambling led to several police raids on the Bikini Club and Quarterdeck Club. At its peak in 1960, there were 27 structures on the flats, but hurricanes, fires and the ravages of being in such an exposed place made every building relatively short-lived.

In 1985, the bottom land on which the stilt structures sit was deeded by the State of Florida to the Federal Government as part of Biscayne National Park. In 1992, Hurricane Andrew left only seven buildings standing, none of which existed during the area's heyday.

The village of Stiltsville often turned out to be the strongest of all the forces of nature, and during the zenith period of the 1960s there were almost 30 houses. For decades, several clubs and ersatz casinos operated in Stiltsville, and one of the improvised pleasure houses accepted only women in bikinis and sunbathing men as members. The Bikini Club was founded by local fraudster Harry Churchville (Pierre), who in 1962 founded a 150-foot yacht on mud beams selling moonshine, and bikini ladies were offered free drinks.

Located in North Miami right inside Haulover Cut and just west of the Haulover Beach Marina, this sandbar is exposed at low tide, surrounded by shallows 2-3 feet deep. Known as the “Margaritaville” of the day boating crowd, there’s truly something for everybody, with family-friendly activities as well as bikinis-and-beer weekend blowouts. There are even floating “food trucks” that will deliver a meal to your boat by kayak.

The most-visited island in Biscayne National Park is Boca Chita, famous for its historic 65-foot tall lighthouse built in the 1930s by Mark Honeywell.  You can tie up at the cleated bulkhead, the only place on the island to dock. From there, you can walk the half-mile trail to the lighthouse and pavilion. The island features camping and picnic grounds, but note that while there are restrooms, there are no sinks, showers, or potable water on the island.

Elliot Key is the largest island in Biscayne National Park, and once was home to a bustling community of pioneers making their living from pineapple farming, sponging, fishing, and salvage, among other pursuits. Now it’s a paradise for swimming, picnicking, camping, and wildlife spotting. There are picnic sites with barbecue grills, a designated swimming area near the campground, and a 1-mile loop trail to stretch your legs. 36 dock slips are available, should you prefer to tie up rather than anchor. Cold water showers and fresh drinking water are available.

No Name Harbor, inside Bill Baggs Cape Florida State Park, is a small natural harbor with walking access to one of the best beaches in Miami. There’s no charge to anchor unless you stay overnight; and you can tie up during the daytime at the breakwater for a small fee. Enjoy a frosty beverage at the Boater’s Grill at the top of the bay after a day of exploring the park and its hiking trails and lighthouse. 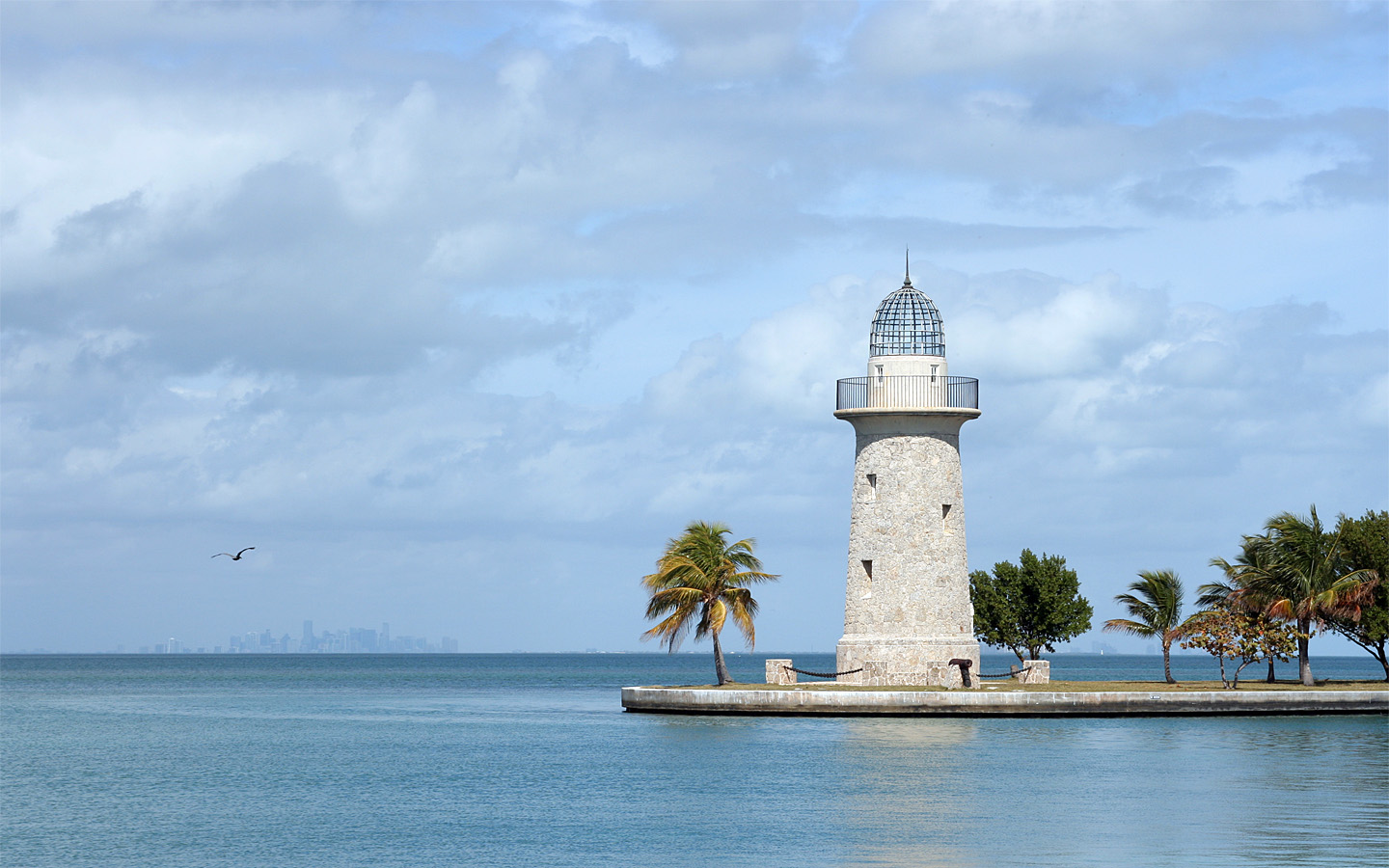 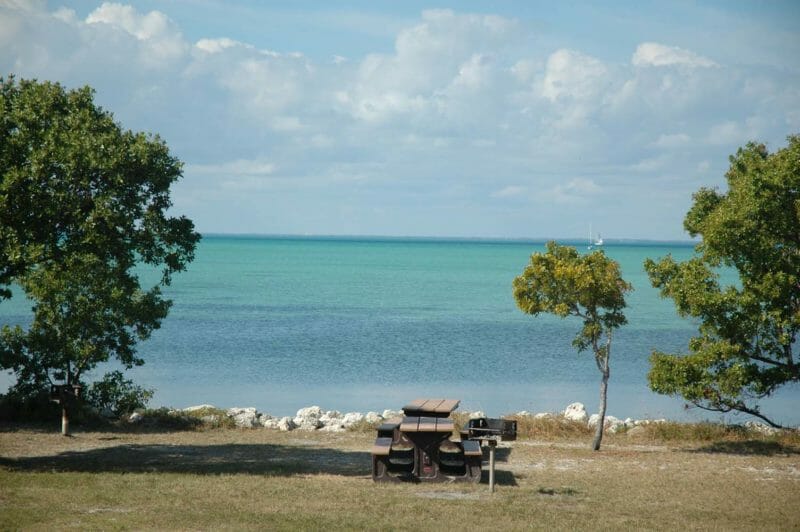 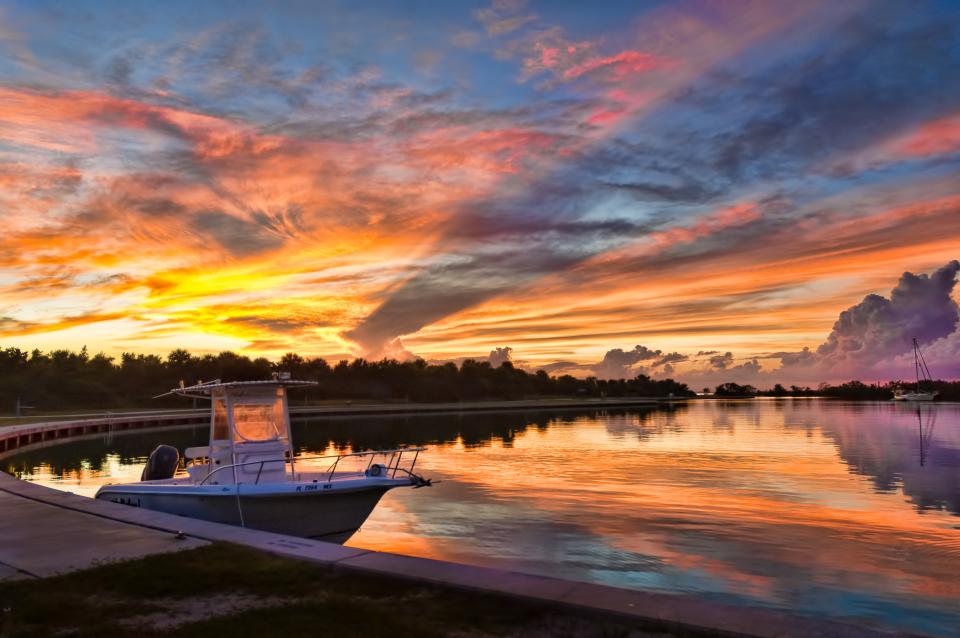